I think I have come to know South Africa pretty well over the last 14 years, the time I have been riding a Harley Davidson as the old adage of “going nowhere slowly” certainly applies when we are on these magnificent machines and one takes in places many South Africans don’t know simply because it is more comfortable to travel around 400kms a day rather than 1000kms or more one can comfortably cover in a car in the space of a day.

We have a vast country and I have been fortunate enough to have seen a great deal of it but nowhere near all of it. I also choose to see it on Harley Davidson rides simply because on a motorcycle your holiday usually starts as the engine of the bike starts and not when you reach your destination.

Having said that though, this trip I am going to tell you about could suit you perfectly if you have limited time available and the idea of a touring holiday appeals as it was a total of seven days of travelling.

The first part of the trip takes us to a destination familiar to fishermen but not all that known to the average South African. I am talking about St. Lucia on the far North Coast of Kwa Zulu-Natal and I will take you there in this blog and then on the rest of the tour we did.

Unfortunately, we only spent an afternoon and evening in St Lucia so we didn’t fully experience fully what is on offer and one really does need to spend a little more time there.

What we did to get to St Lucia was to travel from Johannesburg on the N17 to Piet Retief for our first stop. The scenery starts to get pretty as one gets closer to Piet Retief with the rolling hills all around but it was the next day that we really started to see the good scenery.

We left Piet Retief after a good breakfast at our guesthouse and as I have said before, I believe that staying in guesthouses is the way to go. They can be found in almost every town and city in the country and my favourite website to find a guesthouse is http://www.bnbfinder.co.za. As I have often said guesthouses are cost effective and in most cases you enjoy the attention of the owner.

From Piet Retief we were into the pretty scenery virtually immediately and a stop for fuel at Pongola after some 120km and we found ourselves then travelling along the Swaziland border to St Lucia with some fabulous scenery. 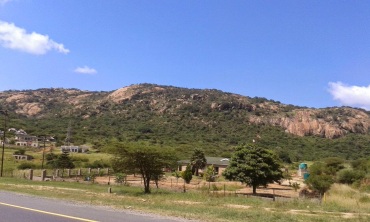 St Lucia is not a big town and sadly it has been badly affected by drought for quite a few years to the degree that the famous St Lucia estuary has been cut off from the sea because of the drop in the water levels in the estuary and river. Nonetheless there is still plenty to see and as can be seen from the photo below the St Lucia Estuary is still an awe inspiring sight. 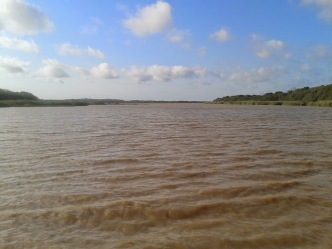 We booked ourselves on one of the small sightseeing boats that operate in the estuary and off we went in search of hippos and crocodiles. On that particular day we didn’t see any crocodiles but there were plenty of hippos and our guide on the boat told us that there are a little over 1200 hippos that make the estuary their home. An interesting fact about hippos in Africa is that more humans are killed by hippos than by any other animal yet they look such docile and slow moving animals, but don’t be fooled. These are extremely dangerous animals. 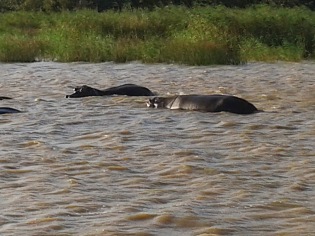 It was probably this knowledge that made me especially nervous when we came across a lone bull that had been rejected by the herd in most cases ousted by a younger bull. This particular chap, as we approached him, immediately started to “mark his “territory” by turning his back on the reeds and urinating on them. His territory and “don’t come near me”!

Our guide on the boat said that he would attempt to “push his buttons” and I suggested to the guide that I didn’t really want to see his “buttons” pushed. He explained that a hippo has two different types of “yawn”. An ordinary “I’m sleepy” yawn and an aggressive yawn where he is telling you to stay away. It is this latter yawn he wanted us to see. I wasn’t too sure about it but our guide assured us that at the water depth where we were the boat was faster than the hippo which is apparently very quick in water.

He edged the boat closer to the bull hippo and managed to get the aggressive yawn which is an extremely wide yawn and can be seen in the photo below.

The hippos were not all we saw and the area abounds with birdlife and we spotted one of my favourite birds, the fish eagle. This was a female sitting high in the tree. I didn’t know that the female can be identified by a larger white “bib” of feathers on her chest than the male.

He also showed us a collection of nests being built by weavers. The particular weavers use two reeds and build between the two and the height of the nest above the water level is an indication of the rain the area can expect in the summer. The higher up the reeds, the more rain the area will get.

St Lucia itself, whilst a small town is certainly not short of accommodation with an abundance of guesthouses and restaurants to suit all tastes. I had family who went there for a week and they told me afterwards that they didn’t have time to be bored as there was so much to do and see. It is also a fisherman’s paradise.

We left St Lucia after just one night there and headed south to Durban for two nights. Two nights in Durban only because it is one of my favourite cities in South Africa and from Durban we travelled to Ladysmith on a road that is not well known but is certainly worth taking. 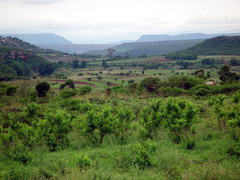 Through the little settlement of Muden which was once a thriving citrus growing area with its once famous orange wine and from there on to Weenen to Colenso.

Weenen, taken from the Dutch and meaning “to weep”, is so called because of the massacre of the Voortrekkers after land negotiations failed between Piet Retief and Dingane, who, on the day on which the agreement was meant to be finalised, had Piet Retief and 101 Voortrekkers killed at his royal settlement near Ulundi.  Other massacres followed in the vicinity and finally, survivors fled the site now referred to as Weenan, and the town was laid out in 1838.

The museum (also from 1838) houses a collection of Voortrekker  artefacts and was constructed by Voortrekker leader Andries Pretorius whose waterwheel is one of the exhibits. It has previously done service as a magistrate’s office, post office and a prison. 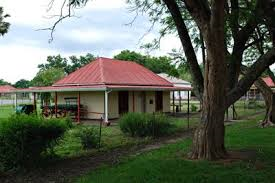 The road from Greytown to Colenso is not busy but the scenery is well worth taking in and many people don’t know the road at all.

and the little pub at the guesthouse has an amazing collection of South African War memorabilia.

After leaving Ladysmith, we and moved on the following day to Harrismith and then through Golden Gate National Park in the Eastern Free State with it’s amazing rock formations.

One of my favourite places in the Eastern Free State and what I hadn’t known before was that in 1912, a resident of Clarens, and surprisingly his name is not recorded, pointed out how much a rock formation looked like the Titanic that had sunk in April of the same year and so it is that the Titanic sits overlooking the lazy little town of Clarens. 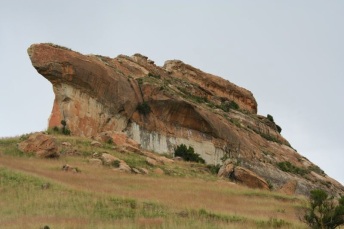 Leaving Clarens after a pleasant stay in one of the many guesthouses, we did the relatively short ride home to Johannesburg. Seven really good days taking in a huge amount of the eastern part of the country.

THE MAGIC THAT IS THE KAROO »
« THE ROAD LESS TRAVELLED