THE OLD ROAD TO DURBAN

A different approach to our “holiday at home” this time, in that where we are going is pretty much a day trip although with no problem at all one could easily spend more time there.

In May 1921 one man with a somewhat crazy idea saw his dream of a foot race from Pietermaritzburg to Durban become reality and at the end of May 2014 we will see the 89th running of the Comrades Marathon.

It’s the road followed by the runners that I want to share. Not the race itself despite being a lifelong passion of mine. The “down run” starts outside the Pietermaritzburg City Hall which still claims to be the biggest red brick building in the southern hemisphere. Originally built in 1893, the Pietermaritzburg City Hall was badly damaged by fire in 1895 but rebuilt to its former glory in 1901.

The city hall organ is one of the largest pipe organs in the southern hemisphere. It has 3806 pipes ranging in size from 11 metres down to the thickness of a knitting needle.

If you look carefully at the photograph of the Pietermaritburg City Hall you will see towards the bottom right, the permanent structure that marks the start of the first Comrades.

Most people believe that the city got its name from two famous Voortrekker leaders, Piet Retief and Gerrit Maritz but there is another thinking that it was named after Piet Retief alone. Retief’s middle name was Maurits and there is therefore some who think that the city started off as Pieter Maurits Burg – but who knows? However in 1938 the city fathers took the decision that the second part of the city’s name should honour Gert Maritz. Interestingly, history tells us that neither Retief nor Maritz ever actually got to the city. Retief killed by Dingane and Maritz died of an illness in the Estcourt area.

We leave Pietermaritzburg and make our way onto the “old road” which until the new highway was built carried the traffic to Durban. Perhaps one of the most famous, or is that notorious, landmarks on the road must be “Polly Shortts” which has been the undoing of many a runner. Polly Shortts is named after a farmer who lived nearby, and whose help was often sought when, after heavy rain, the road up the hill became muddy and impassable and one can imagine that when you consider almost 2km of an extremely steep hill in the days before tarred roads that Mr. Shortts’ tractor was needed.

Not too far after Polly Shortts we dip down to a little river and we find the Tumble Inn and in the days when Comrades started at 6am it was not uncommon to see spectators having dragged double beds onto the route and would be watching the race as the runners went by. Naturally very warmly dressed as at that time on a winter’s morning very “fresh” in that part of the world.

Tumble Inn Teapot is situated on a Stud Farm in Ashburton. It’s a quaint little farmhouse offering a relaxed atmosphere to enjoy a timeout with the girls, a quick snack with hubby or a get together with the moms group! It sits at the bottom of a little hill that runners in the “old days” used to incorrectly call Mkondeni which is actually a suburb of Pietermaritzburg. The modern runner calls it “Little Polly’s”.

Nothing much to see as we climb up through suburbs to reach the N3 and the turnoff to the Lion Park and apart from the game that obviously include lions you will find elephant and various antelope and certainly worth a visit.

But let’s move along the road back onto the Comrades route as we head to the highest point between Pietermaritzburg and Durban at Umlaas Road and on through to Camperdown and then to Cato Ridge and then onto the “old road” proper.

Along what is known as “Harrison Flats” and the turnoff to Nagel Dam and into the start of the Valley of 1000 Hills but for a better view of the Valley we need to travel a bit further.

On from the turnoff to Nagel Dam a few kilometres further we reach the Entambeni School for the Disabled who have long been recipients of part of the charity from Comrades. The children are out in numbers at the side of the road cheering the runners on race day.

Another couple of kilometres and we get to Inchanga Hill. At the top more fantastic views this time towards the N3 down far below with scenic KZN in the background and ahead lies the little village of Drummond that is the half way in Comrades. That comes alive on Comrades day as hundreds of spectators gather to see the runners and that dreadful gun the signals the half way cut off time.

But Drummond hasn’t always had its tarred roads for runners to use.

About a kilometre on the Durban side of Drummond is a view site with possibly the best view of the breath taking Valley of a Thousand Hills. The Valley of 1000 Hills is one of those few holiday destinations that has something for everyone. Unspoilt nature, wildlife, magnificent scenery, wining and dining, and warm country hospitality just a half an hour’s drive from the centre of Durban. The area is named after the thousands of hills which tumble down to the mighty Umgeni River, which flows from the Drakensberg Mountains to the Indian Ocean.

The old joke goes about sending mother in law for a one week holiday on each hill! Unkind and old but still used by many a downtrodden son in law.

This is also the spot where you will find the Comrades Wall of Honour featuring the names of many runners who have travelled this road.

Then on into Botha’s Hill and some famous landmarks, probably the best known is the old Rob Roy Hotel that has now become a retirement home and one can but envy the views that the residents have with a different view over the Valley of 1000 Hills.

Not much further along the road is one of KZN’s most famous boys’ school, Kearsney College that excels in virtually every area. The classroom and the sports fields.

Again the boys have to spend their time looking at and running through the fantastic scenery offered by this part of South Africa, in a province often regarded as having not much to offer.

Down the valley and into Hillcrest which about 30 years ago was no more than a village that has exploded into a good sized town offering everything from shopping to accommodation and it is from Hillcrest that one travels to get to the stunning Inanda Dam the second stage finish of the famous Dusi Canoe Marathon.

Leave Hillcrest and make your way through the leafy suburb of Winston Park and through into Kloof (heaven help you if you don’t pronounce it “Clue-oof” if you visit KZN). It is here in the Old Main Road that hundreds of spectators set up their areas to watch the race and cordon them off the day before Comrades to see the runners come through. The braai and beers forming as important a part of the day as do the runners.

Then of course there’s Kloof Gorge, not far from the centre of the town and certainly worth a visit. Again a little known beauty spot in the province and on the “Old Road to Durban”.

After Kloof, it’s the drop down Field’s Hill into Pinetown. A town that in the sixties was a quiet little family type town but that over the years has boomed and as one travels through the centre of the town and reach the Municipal Buildings one will find the stumps and bail on the commonage between the Pinetown Civic Centre and the Library alongside Old Main Road to commemorate the founding of the Pinetown Cricket Club in 1878, when the first match was played there.

Leave Pinetown and it’s up and over Cowies Hill where at the top there is a fantastic view back over the town. Cowies Hill has always been a very nice suburb of Pinetown with lovely houses and gardens. A sought after suburb.

Then it’s into Westville. Westville is an area near Durban and is some 15 km from Durban itself. Formerly an independent municipality governed by a Town Council, it is now part of the eThekwini Metropolitan Municipality, which also includes Durban. The town was laid out on the farm Westville (named in honour of Martin West, who was the first British lieutenant-governor of Natal) and it was formed in 1847. It developed from a settlement of German immigrants who arrived in 1848, and was proclaimed a borough in 1956.

Leave Westville and you are at your destination in Durban after you have seen some of the most beautiful parts of South Africa. A part of the country that thousands of runners who live the dream of a man who started this magical experience called The Comrades Marathon in 1921 have experienced. 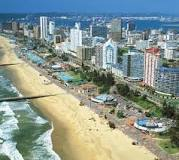 It’s estimated some 300,000 runners have travelled this Old Road to Durban or from Durban over the years since 34 hardy souls set off to create history from outside the Pietermaritzburg City Hall on 24 May 1921.

JOHANNESBURG – THE CITY OF GOLD »
« THE GARDEN ROUTE CONTINUES