DURBAN – THE WARMEST PLACE TO BE

Durban has long been the destination of choice for holidaymakers but about 10 years ago lost some of its popularity but is fast getting it back as holidaymakers find it an exciting and inexpensive place to be with a great deal of accommodation in guesthouses both in Durban suburbs and in outlying suburbs.

The derivation of the word eThekwini has been debated for years with some language experts saying the name is said to mean either ‘lagoon’ or ‘the one-testicled one’, referring to the appearance of the Durban Bay.

In an 1859 Zulu grammar book, Bishop Colenso concluded that the root word “I Theku” means “bay of  the sea” and noted that the locative form, eThekwini, was used as a proper name for Durban.

A 1905 Zulu-English dictionary notes that eThekwini is used for Durban.

Many residents of Durban refer to the municipal area phonetically as “eh-Tek-When-i” which if one listens to a Zulu speaking person saying the name one will soon realise that that is not quite correct.

So what is there in Durban to attract the visitor?

The Durban Municipality started work on the  promenade along the beachfront starting from uShaka (we’ll get to that later) shortly before the World Cup in 2010 and converted it into a world class facility enjoyed by runners, cyclists and those simply out for a stroll in the sunshine. 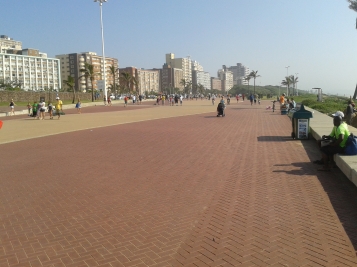 The promenade stretches for a distance of some 6kms of brick paved walkway and has numerous restaurants and take away outlets across the road from the beaches.  There can’t be very many places in South Africa where one can sit at a table under an umbrella on the sand to enjoy a Sunday morning breakfast not 60 metres from the water’s edge.  Food is not expensive but it is good and it’s filling. 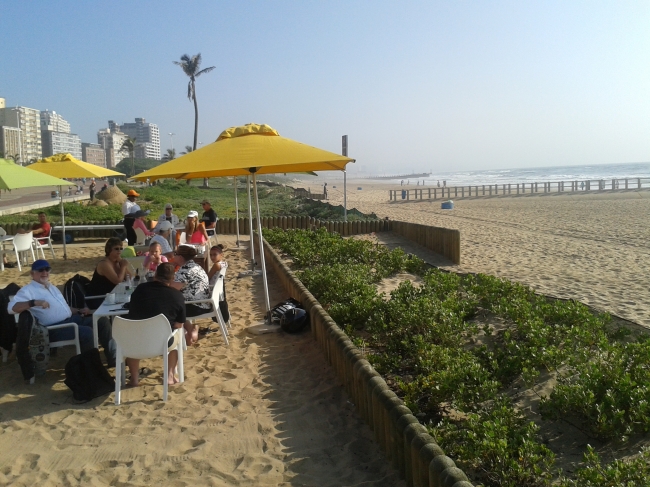 As I have said the beaches are great, the water warm enough to swim almost all year and the weather, whilst very humid from November through to March is extremely pleasant.  The months of April and May are generally said to be the best in Durban but when you consider that you can swim in the sea in July, the middle of  winter, this is an indication of exactly the sort of climate you can expect. Then on top of that, it seldom rains during the autumn and winter months.

One major plus of the Durban beaches apart from the water temperature is the fact that many years ago shark nets were installed as a protection for bathers against these predators and they have worked well over a long time allowing safety when in the water. 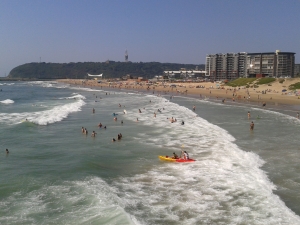 I mentioned uShaka Marine World built some years ago and home to one of the longest living dolphins in captivity, Gambit who is over 40 years of age and still the star of the dolphin shows at uShaka that are held a few times a day.

In addition to the dolphin shows, one of the finest aquaria in the world can be found at uShaka with a huge variety of fish and the shark tanks the main attraction although the smaller tanks have some of the most fascinating sea creatures.

The big attraction of course, for children is the water playground with its slides and pools where kids drag reluctant parents and even more reluctant grandparents onto some on the tube rides down slides. 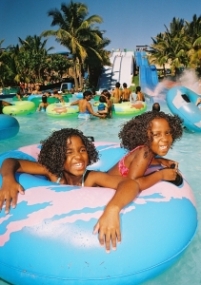 It isn’t only the children who enjoy the playground though and many adults are found sunning themselves on the lawns rather than lying on the beach sand. There are some who say that the cost of entry to uShaka is expensive but when you consider that your ticket gives you the dolphin show, the aquarium and the water playground for the entire day if you wish, it isn’t expensive at all.

It was an English commentator during the World Cup in 2010 who said “ask any Durbanite and they will tell you that they have just two seasons in a year – summer and summer.

Staying with the World Cup, and the stadium at which the Durban matches were played is quite magnificent and one of the most modern in the world able to seat a little under 70,000 people.  The Moses Mabhida Stadium is the pride of the city and since the World Cup, has been used for all sorts of events, many of which have been sporting but primarily football but with cricket and even music concerts held there.

For the more adventurous and if you don’t have a fear of heights you can take the two-minute Sky Car ride up the stadium arch, before you step onto the platform and take in the unparalleled 360º views of Durban and beyond.

The Sky Car gives you the chance to see Durban from a 106m-high view point. Look one way and you take in the ocean views as far as the eye can see, look the other way and you’ll see the city living for miles.

Then if you are really adventurous and you are brave enough to free fall 80 metres into the stadium bowl then the Big Rush Big Swing is just for you.  It has been officially named the world’s tallest swing by the Guinness Book of Records since 14 May 2011. Certainly not your average swing, the Big Swing lets you to take the jump swinging out into a massive 220m arc where you “fly” into the centre of the stadium.

If you don’t mind, I’ll give that one a miss!

After the day lazing in the sun or diving from the top of the Moses Mabhida Stadium, it’s time for some night time action and many will head to Florida Road that over the last few years has become the place to be and from sidewalk cafes in the mornings, it all goes on through the day and well into the evening with restaurants, clubs and bars offering the fun that Durban is known for and Florida Road has earned the reputation as one of Durban’s top night spots. 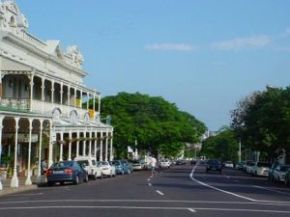 For those looking for the more sedate activities such as shopping (not sure that husbands would agree), Durban has everything to  offer from the usual chain stores to a host of boutiques in the many shopping centres around Durban and the latest fashions can be found as well as the more formal wear for that special occasion and one such special occasion must surely be the annual Durban July horse race held at the Greyville racecourse  in July each year and this is probably the event that both visitors and locals have the opportunity to show off fashion, sometimes to its extreme.

Apart from “The July” there are numerous other major sporting events in the city. Home to the Sharks rugby team at the Kings Park Stadium where not only provincial matches are played but also international matches.

The famous Dusi Canoe Marathon, a three day event from Pietermaritzburg over a distance of 120Kms ending at Durban’s Blue Lagoon is held in February every year (it used to be held in January) and of course the “greatest ultra-marathon in the world” the Comrades Marathon in alternate years starts and finishes in Durban.

I could go on for pages about Durban but I guess the city’s “pay off line” says it all.

THE GARDEN ROUTE »
« MPUMALANGA – THE REST OF IT